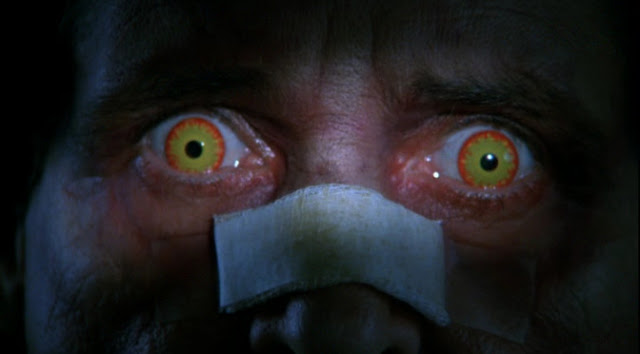 Presented here is a perfect example of a film doomed to fail from the word go. The original ‘Exorcist’ is widely regarded as one of the greatest horror movies ever made. Widely successful and even Oscar-nominated, seemingly a rarity for horror pictures. Warner Brothers quickly greenlit a sequel, which came to light in 1977. John Boorman’s ‘Exorcist II: The Heretic’ is often regarded by critics and fans alike as one of the worst movies ever made.
Seemingly ashamed of how his work had been treated, William Peter Blatty, the author of the original novel on which ‘The Exorcist’ was based, wrote ‘Legion’ in 1983. A standalone sequel to the original book. Soon after, he went on to adapt his book into a screenplay before taking on the task of directing the film himself. Sadly, distributors didn’t want to release ‘Legion’, they wanted ‘Exorcist III’.
The film was heavily altered against Blatty’s original vision. The released film includes lines, scenes, even whole characters which don’t appear in Blatty’s directors cut. Regardless, the film was released in 1990. The film made a profit but was still considered a box office disappointment. Hardly surprising, most people would’ve expected either a rehash of the original or another ‘Exorcist II’. Oh, how wrong they were.
The title is really the film’s biggest issue. This film is not a sequel to the original. Yes, it has plot connections and characters carried over, but it’s not a sequel in the sense that seeing the first film is at all important. Calling it ‘Exorcist III’ is especially odd considering that both it and the novel it’s based upon completely, and rightfully, ignore the events of ‘Exorcist II’.
Many people today will go into the original film knowing more or less what to expect. Being as famous as it is, it’s been parodied or referenced thousands of times. Even if you’ve never sat down to watch the film, you’ve probably seen enough clips or parodies to get a general sense of the plot. ‘Exorcist III’ is lucky in this regard, as anyone going into it almost certainly won’t know what to expect.
The film has a slow pace, which I think works to its advantage. It takes the time to establish character and mood. It’s a talky piece, going less for the shocks or gore. It’s a very psychological horror film, in the best way possible. As you would expect from a film written by a novelist, the dialogue is snappy and well written.
Performances across the board are amazing. The relationship between George C. Scott and Ed Flanders’ characters early in the film really does have the feeling of two very old friends. The dialogue here is fast and natural sounding, with the actors even talking over each other at times. However, the star of the piece without a doubt is Brad Dourif.
To reveal his role in the film would be a pretty big spoiler, so I’ll be careful with my wording. He isn’t in the film longer than a few minutes, but his performance is simply one of the best I’ve ever seen in any film. All of his scenes are long monologues which last for minutes at a time, but you are simply so captivated by his performance that you won’t notice. You can’t take your eyes off the man.
The film suffers from the same issue as ‘Psycho II’. Both are unfairly dismissed based on their titles, both are sequels to famous originals, both are amazing films in their own right. I’m of the very unpopular opinion that this film is superior to the original. The original is an excellent movie which comes highly recommended from myself, but ‘Exorcist III’ just works so much better for me. How I just wish they’d called it ‘Legion’.
Overall: A masterwork in atmosphere and mood. If you like your horror slow-paced and intelligent, you’d do well to seek this out. Steller performances, excellent writing, skilled direction. No major gore or shocks to put off the squeamish, this is a psychological piece, a thinker’s movie. Do yourself a favour and disregard the title completely. This is not ‘The Exorcist III’, this is ‘Legion’!
Highly recommended!