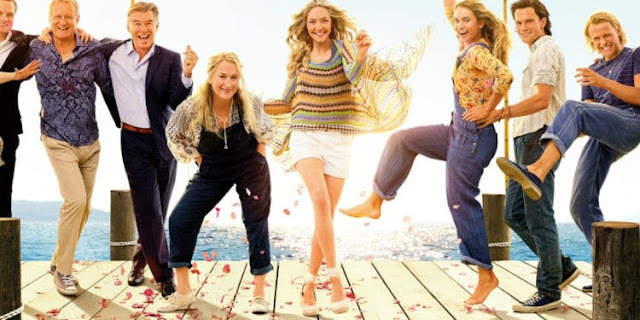 Be warned, this is not an objective review. I can’t be objective with this film, the best I can do is try and explain where I’m coming from. So, Mamma Mia. The first film came out 10-years ago, massive critical flop, made about 12 times its budget back. Critical flop is an understatement, the first film was savaged, and rightfully so. The original Mamma Mia was an atrocious film, an awfully contrived story, poor acting, even worse singing. Given that description, it might surprise you that the original Mamma Mia is one of my favourite films.
I’ve often heard the original described as “dumb fun”, I suppose that more or less surmises my thoughts, although mine are typically closer to “ABBA, Greece, weddings, yay!”. It helps that the songs of ABBA can’t be made bad no matter how many times you have Pierce Brosnan try to sing them. The best mindset to go into the first film with is simply not to expect much and to simply go along with it. I can’t recommend the original on an objective level, but this isn’t an objective review now, is it?
As you might imagine, I was excited about the sequel. In a year with a new Halloween film, a new Predator film, Orson Welles’ The Other Side of the Wind finally being finished, and a film called The Man Who Killed Hitler and Then the Bigfoot starring Sam Eliot, Mamma Mia 2 was the film I was most excited for. My thoughts going into the theatre were “I hope this is as bad as the original”, my thoughts coming out were “That had no right to be that good”.
What Mamma Mia 2 ends up being is a slicker, funnier, better acted and sung version of the first film. It’s both a loving reunion for the die-hard fans of the original (they got Old Greek Woman Carrying Sticks to come back for a cameo, for God’s sake), but in the process ends up being so much better.
The indestructible tunes of ABBA are out in full force once again, with a plot structure oddly similar to The Godfather Part II. Thankfully, we’re spared from too much of Pierce’s singing this time around. All the same, if I were alone in the theatre, I guarantee you that I would have been dancing throughout. It recaptures the sheer, upbeat fun that it seems people managed to find with the original.
As I’ve said, you shouldn’t take this as an objective review. I was going to love this film one way or another regardless of quality. I do think it’s objectively better than the first film, but I also feel like you already need to enjoy the first film to get the full extent of this one. Certainly, if you enjoyed the first film I doubt you’d have read this far, you’d be in the theatre watching this for the 3rd time.
Overall: It’s just… it’s so difficult to convey my emotions in text form. If you were to ask me in person, I could give a quick fire, very emotional explanation of my feelings, but the cold, matter of fact nature of text makes that difficult to do. My review of the film in reality mostly consists of laughs and squees of glee. I absolutely loved it, but then again, I’m not objective. What the hell, I’d say go for it. There are worse ways to spend a night out than with The Godmamma Mia Part II, you could make the mistake of seeing Skyscraper instead.
Highest recommendation. Fight me!


Oh, and make sure you stay until after the credits.
[Originally published July 26th, 2018]