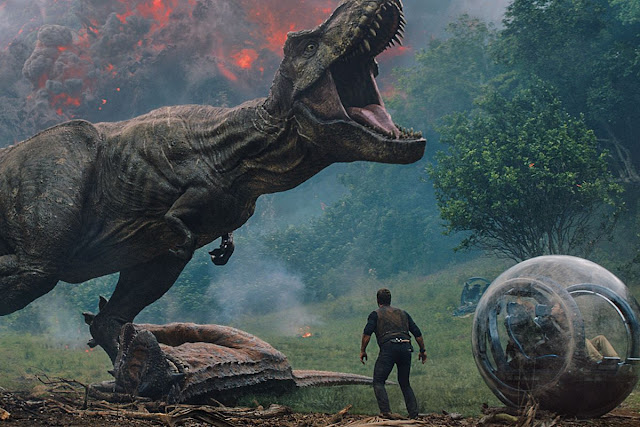 A bit of forewarning. This is going to differ somewhat from my usual pattern of writing, in that this will probably come out slightly less formal as well as being very spoiler heavy. If you want my opinion on if you should pay money to see this film or not, I think you shouldn’t. Unfortunately, I can’t tell you why without spoiling most everything. If you’re still planning on seeing it, cease reading. You’ve been warned.
Let’s be honest here, the Jurassic Park films were never good. No, not even the first one. Certainly not any of the sequels. They have always been about the same thing, stupid people making stupid decisions. This film isn’t an exception.
Where to start?! The plot: Following the events of the previous film, the dinosaurs have basically been abandoned on Isla Nublar. But then there’s a volcano that’s gonna go off and kill them all. The big dilemma, do we attempt to save them or not? Now, the smart people in the audience might ask themselves “Why not just let them die and then clone some more?”. I’m going to quote word for word the reason the film gives against this idea “ *This space intentionally left blank* ”.
Yeah, the issue that literally drives the entire plot forward is actually a complete non-issue. There is no reason that the events of this film need to happen, other than box office returns. Granted, the scheme of the main villains involves saving the dinosaurs on the island, but there is no reason for our supposed heroes to try and secure them. Like, none whatsoever.
I say supposed heroes, I’m not sure I agree that they are. Let me spoil the ending for you. The dinosaurs are locked in an underground lab with a deadly gas leak. The villains are all dead. The heroes have a choice, let them die or set them free. Now, as I’ve pointed out earlier, if the dinosaurs die they can just clone more. The heroes decide to set the dinosaurs loose on the United States. Yeah, our heroes decide that the more heroic thing to do in this situation is to put the lives of millions of people at risk rather than killing a few animals that you could more or less immediately clone again.
I went to see this film for two reasons. Reason the first: I have a soft spot for anything with giant monsters breakin’ stuff. Reason deux: I went to see the last one. I hated the last one. I went into the last film having read rave reviews, I expected a good film. Therefore, I walked out incredibly disappointed. I walked into the cinema with the previous experience in mind. I decided about 10-minutes into this mess to stop bothering to try and take it seriously. And you know what, I had a blast!
I had one of the best cinema experiences I’ve had in a long time. The tween girls chattering behind me might have annoyed me more if I’d been at all invested. Whenever the film pulled an incredibly obvious plot twist or tried to be serious and emotional, I was cracking up. Seriously, I was laughing about twice a minute at the ridiculous crap this film was shovelling. Don’t mistake this for the film being good. It’s terrible, it’s one of the worst films I’ve seen in a really long time. The fact that I enjoyed it had absolutely nothing to do with the film itself.
Overall: Terrible. Utter rubbish. I had a great time. Don’t pay money to see this movie. Seriously, DO NOT support this garbage. I’m not going to endorse any illegal activity, but I’d recommend it if you could *somehow* obtain this film for free. Turn off any cognitive function, and preferably enjoy with some highly intoxicated friends.
Recommended with drunk friends on the strict condition that you do not pay for it.
Oh, and Jeff Goldblum's only in it for about 30-seconds. There is literally more of him in the trailers then there is in the film.
[Originally published June 13th, 2018]