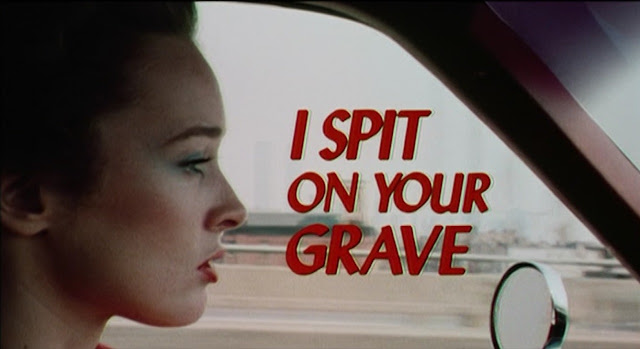 Originally released as ‘Day of the Woman’
[Spoilers ahead]

The IFCO and the BBFC both did a very clever and subtle thing with their names. In 1984, The British Board of Film Censors officially rebranded itself as The British Board of Film Classification. As with most changes in society, laws, and government, it took Ireland over 20-years to catch up. The Irish Film Censors Office was named as such until 2008, at which point it was officially renamed as The Irish Film Classification Office.
Of course, the reason for the name changes should be obvious. Censorship obviously has negative connotations, especially when applied to a government body. The general public dislikes the idea of government telling us what we can and can’t do. You may insert a comparison to your fascist dictator of choice here. Classifying something, on the other hand, doesn’t sound quite so scary. Not censoring art, *classifying* it. Sounds kind of like cataloguing something, that's not so bad, right?
Never mind the fact that the name change has nothing to do with the organisations changing. No, no, they still do much the same job they ever did. Indeed, post-1984 the BBFC became the primary legal body in the infamous ‘Video Nasties’ debacle. The effects of which are still felt to this day with many of the films involved still not seeing a re-release in the UK, therefore effectively still making them illegal to sell. Of the 72 films which made up the ‘section 2’ lists, few were quite as hated by mainstream critics as 1978’s ‘I Spit on Your Grave’.
Hated really is an understatement. Roger Ebert, arguably the most famous film critic of all time, once called it 'Sick, reprehensible and contemptible', a quote displayed with pride on the box of the recent Blu-ray release. He later went on to describe it as 'the worst movie of all time'. Upon release, you would have been hard-pressed to find a soul that might claim to like the film.
I know better than most that making an academic defence of something like this is difficult without first giving the proper context. Even so, I know much of the reading audience will read the plot description and decide the film is not for them. This is perfectly fine. No art has to appeal to everyone. However, I will ask that nobody pass judgement on something they haven’t seen. Decide it’s not for you, fine, but do not decide for other people. British radical feminist Julie Bindel protested a screening of this film in Leeds before retracting her opinion years after the fact and calling it a 'feminist film', this was presumably after she actually bothered to watch it.
The plot involves Jennifer Hills (Camille Keaton) renting an isolated cabin, hoping the seclusion will help get her novel off the ground. This all takes a turn for the worse when a group of four local men decide to rape her. They leave the scene of the attack, assigning one of their number, the mentally handicapped Matthew (Richard Pace), to kill Jennifer. However, Matthew chooses to leave her alive. Once Jennifer recuperates, she then goes on the kill each of her attackers in increasingly violent ways.

Is the film any good? Well, that argument shouldn’t at all play into whether or not the film deserves a release, but I suppose this is meant to be a review after all. I personally think the film accomplishes what it sets out to do. On a technical level, it suffers from many of the trappings of low budget film making. The sound, in particular, is really poorly done. The direction is generally good and the acting varies between really bad and really good.
I’ve long seen arguments that the film glorifies the act of rape, that it somehow takes the side of the rapists. These arguments are quickly put to bed simply by watching the film. The infamous rape scene, lasting over 20-minutes, is as shocking and brutal as you’d expect. It makes no attempt to glorify the act. It is violent, ugly, and unpleasant, that’s the point. Especially considering the revenge scenes in the second half of the film, the odds of someone wanting to commit rape after watching this film are about as likely as someone wanting to try heroin after watching the detox scenes in ‘Trainspotting’. I've seen people criticise this film because the rape scene made them uncomfortable; To those people, I say that anything depicting the act of rape should be uncomfortable, that's a sign that the filmmakers did their job right. If you're not interested in seeing a film that will make you uncomfortable, I have no idea why you decided on one called 'I Spit on Your Grave'.
This is as anti-rape a film as you could ever make. The lesson learned is that nobody wins in this equation. She gets raped, they get killed. You can extrapolate an egalitarian message that men and women are equally capable of committing horrible acts of violence, or perhaps a more optimistic feminist message that woman can remain empowered despite what others do to try and keep them down. In any case, it’s certainly not taking the side of the rapists. Jennifer is the last one standing. The rapists, with the possible exception of Matthew, are not in the least sympathetic, nor should they be. They are not innocent, end of. They deserve to be punished for their actions. Although whether or not the particular punishment Jennifer gives them in the second half of the film, quadruple murder in retaliation for rape, is condonable in its own right is up for debate, but as the famous tagline states:

'This woman has just cut, chopped, broken, and burned five men beyond recognition… but no jury in America would ever convict her'
It is slightly erroneous, there are only four rapists in the film, and nobody gets burned. Regardless, I’d say this is more than argument enough against those who claim that the film takes the side of the rapists. You can, therefore, come to one of two conclusions, the film is taking the side of Jennifer, or the film isn’t taking any sides. Frankly, I’m not sure what conclusion to come to.
On the one hand, you can argue that neither party is in right here. Both sides commit horrible acts, and neither side comes out better in the end. You can make the argument that the rapists drew first blood, and indeed the movie does seem sympathetic towards Jennifer. We spend more time with her, build her character more, and in the end, it does seem more acceptable for her to attack several guilty men then it is for several men to attack an innocent woman. You need only look at the tagline to see who the movie seems to support. She refuses to be a passive victim, she takes these men down. By the end of the film, she is empowered, most certainly not a victim, but the question remains, is she the better for it? Is what she did fundamentally right? That's a question that I'm not comfortable answering, it entirely depends upon your own personal politics.
As someone who doesn't personally believe in capital punishment for any crime, this leaves me with a great amount of discomfort. The rapists are unquestionably the villains of the film,  so we naturally want to see them get what's coming to them, but killing them also goes against my moral compass. Given the real-life statistics that only about one in one-hundred reported rapists serve jail time, you could argue that Jennifer did what she had to do in order to bring these men to justice. Given everything we've seen, everything we've been through alongside her, it's easy to support Jennifer here, you can understand why 'no jury in America would convict her'. The film instills an incredibly uncomfortable sense of cognitive dissonance in me. Certainly, I wouldn't side with Jennifer in an ideal world, but I honestly don't know whether or not to side with her in our sadly less-than-ideal one. In the end, the message of the film may be as simple as 'hate begets hate'. The film is not anti-woman, nor anti-man, it’s anti-violence of any kind.

I should stress that you shouldn't interpret this as a criticism of the film or its characters, on the contrary, herein lies perhaps what I admire most about the film, its total unwillingness to provide you with any easy answers. It asks a lot of questions, questions we don't like being asked, questions that don't have any one answer, and then spits you back into the world and tells you to figure it out yourself. That sense of uncertainty will linger with you long after the credits have stopped rolling. It isn't fun to discuss or even to think about, and that sense of discomfort is, I feel, the entire point. After all, what do you expect to feel from something called a 'horror film'? Surely a film that can elicit any sort of emotional reaction has to have some artistic merit, right?

Bet that’s more analysis than you were expecting about 'the worst movie of all time'.
Overall: The film is not to everyone’s taste, but what great art is? The film certainly deserves to be seen, perhaps now more than ever. Outright banning it, thereby ignoring the problem entirely, seems like a bit of a cowardly way to handle the issue. If you reckon you’re up for it, import an uncut copy from overseas and make your own mind up.
Recommended for those who can stomach it.
Oh, and stay clear of the remake. As if I should have to tell you that.