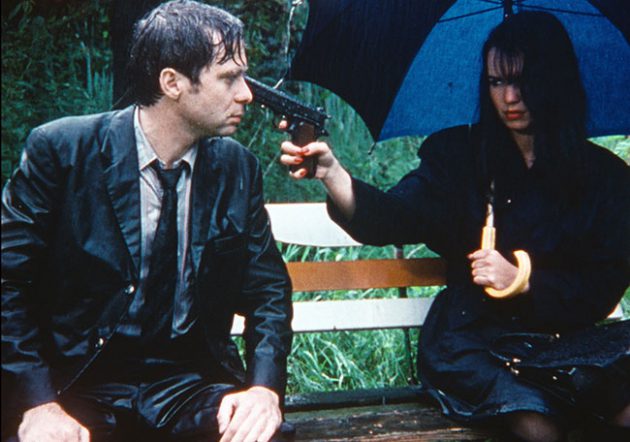 Director Jörg Buttgereit (‘Nekromantik’, ‘Schramm’) is quite a famous name in underground horror circles but is rarely spoken of in more mainstream terms. Watching any of his films, the reason becomes apparent immediately. His work is too artfully minded for a mainstream audience, but perhaps too purposefully shocking to please the pretentious art film crowd. The uneasy worlds he creates and the actions that take place within them cause many to slap the horror label on them. While horrible acts do occur in ‘Der Todesking’, I feel that perhaps there is not any category suited for it.
The best comparison I can make is E. Elias Merhige’s ‘Begotten’ (1990), specifically the opening 10-minutes. Stretch that out to 75-minutes, and you have something like ‘Der Todesking’. It plays like an anthology film, taking place over seven days. There is a loose framing device of a chain letter being sent to all the major players, but I’m not sure I’d say there’s much of an overhanging plot. The film spends each of the seven days exploring the idea of suicide and violent death in a variety of ways.
I feel the only way I can suitably review this film is simply to describe it and tell you to make up your own mind as to whether or not it interests you. The ‘days’ in the film range from a man calmly swallowing poison, to a woman reading a passage about the rationalization of suicide before walking off screen, to a man simply discussing his turbulent relationship with his wife. I can honestly say that on a first viewing it is more or less impossible to guess what the film is going to throw at you next.
The film is one of the more visually audacious pictures I’ve seen in a while. I could list examples of some of my favorite shots, but I fear that to do that would be to ruin the experience of anyone going into it otherwise blind. Regardless, it presents a rough, tough, unapologetic look at a grim and depressing world. It offers no explanation to any of the violent acts portrayed. Doing so would defeat the point. If violence is offered an explanation, it ceases to be as shocking.
So, is there a greater message to this film? I think not, although paradoxically I feel that may be the point. Using the facade of an art film, it tricks the audience into believing that these deaths must have some greater meaning when, just as is often the case in real life, they don't. They are just random, messy and pointless. Perhaps the film is really pointing a finger at the society and, by extension, the audience who try to rationalize these acts which by definition cannot be rationalized. Perhaps we shouldn't spend our lives focusing on death and dying but instead spend them focusing on living.
Overall: Shocking and brutal, but undeniably fascinating. To say this isn’t for everyone would be a spectacular understatement. It’s a hard one to recommend. It will have a very niche appeal at the best of times. The film is a tough sit, but if you’ve read this far and still feel like it’s something you can handle, then I’d say go for it.
Recommended for the strong-stomached art crowd.
[Originally published March 29th, 2018]