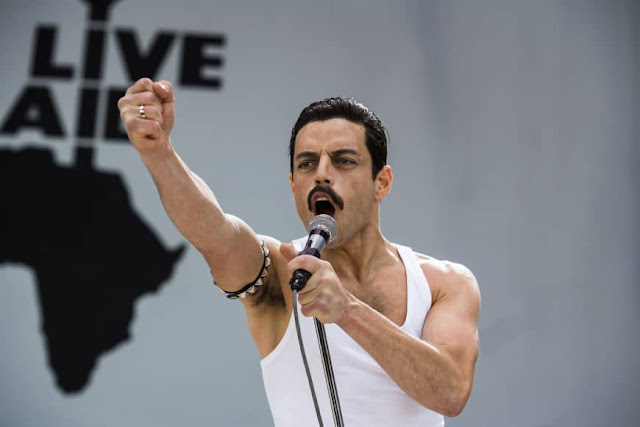 Is there anybody out there who doesn’t like Queen? Even if you don’t follow their entire catalogue, everybody knows the hits. You’re My Best Friend, Don’t Stop Me Now, Under Pressure, Radio Ga Ga, Another One Bites the Dust, Flash, Somebody to Love, We Will Rock You, We Are the Champions, and of course, this film’s namesake. Odds are that even if you’re particularly big into Queen, put in a greatest hits CD and you’ll realise you’ve probably heard all these songs before without knowing who performed them.

I’ll admit I’m a ‘greatest hits’ fan of Queen. I’m not caught up with the history of the band itself, and I don’t think I’ve ever listened to a full album. I have no idea how historically accurate this film is, so I won’t be grading it on that.

The band side of the film is basically a filmed version of a greatest hits album. Going through the discography one hit at a time, the formula repeats itself maybe half a dozen times throughout the film. The band is in a rut, can’t find inspiration, suddenly one of them comes out with something genius, intercut them recording with a live audience going bonkers. It is, to quote Clarisse Loughrey’s thoughts on the film, presented with a very “wink nudge attitude”. Very fan servicey in a way that will probably come across as condescending to the more discerning of viewers. A perfect example is the Mike Myers cameo where he specifically mentions that Bohemian Rhapsody will never be a song that “kids will head bang to in their car”*, this solicited an audible groan from yours truly in the theatre.

Of course, the band side of the film is less than half the story. This isn’t so much a Queen biopic as much as it’s a Freddie Mercury biopic. This side of the film is mixed for me. Rami Malek is fantastic in the role, a genuinely amazing performance. Having seen him previously in Mr. Robot, I can say Malek has incredible range in his performances. He brings Mercury to life both in his mannerisms and his physical performance. The execution on the other hand, well…

As I said, I can’t comment on how accurate this portrayal is, but the story presented here just comes off as kind of shallow, glossed over. The film dedicates more time to Freddie’s personal story, but dedicates more passion and energy to the music. Yet despite all this I still felt the film was about 20-minutes too long.

The performances all around are pretty much flawless. All the actors look alike to their real-life counterparts, from the word go I believed them in their roles. The songs are all lip-synched, which seemed incredibly distracting for the first song or two, but quickly stopped being an issue. The soundtrack is, of course, fantastic. Some of the songs seem a little shoehorned in, Radio Ga Ga and Who Wants to Live Forever come to mind, especially considering this film ends before the latter was ever recorded.

I don’t like to be the sort of person that examines the objective quality of a film. Art is entirely subjective. I don’t like to pick apart all the objective pros and cons, I like to judge a film based on whether I enjoyed it or not. I’ll point out what detracted or added to my experience, but in the end whether or not I recommend a film comes down to a yes or no question. Did I enjoy my time? In this case, yes. Perhaps spending the evening with some good friends contributed to my feelings, but I had a fun time with Bohemian Rhapsody.

Overall: The film is enjoyable, I suppose that’s the main thing. A shallow yet passable biopic mixed in with some of the greatest rock songs ever recorded. Excellent performances all around. A tad overlong, but nothing I’d complain too heavily about. No masterpiece, but I’d classify it as a good rainy afternoon movie. Of course, if you’re already a big fan of Queen, I doubt you’d even bother to read this before rushing out to buy a ticket.