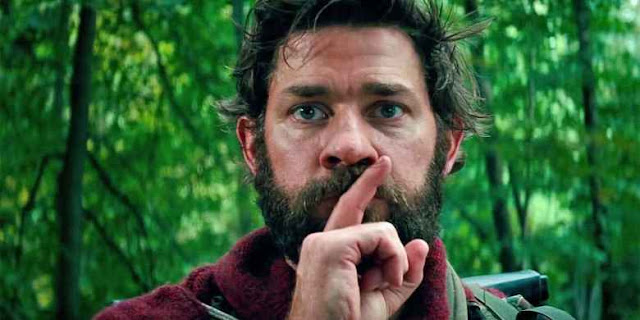 Let’s get straight to it. The plot is about a small group of people attempting to survive against a pack of vicious animals of unknown origin. The catch? The animals are blind and must rely entirely upon sound to hunt their prey. Sound familiar? On the surface, ‘A Quiet Place’ is essentially ‘Tremors’ (1990) sans the comedy elements.
In terms of statistics, I counted eight jumps scares. Jump scares get a bit of a bad name in horror circles, I’m personally divided on them. I can think of plenty of examples of good jump scares in horror cinema. ‘The Exorcist III’ (1990), a terribly underrated film, contains what is possibly the single greatest jump scare in any horror film.
There are two things that make give jump scares a bad rep. Firstly, when a film uses nothing but jumps to scare the audience, it just comes across as lazy and cheap. Secondly is the use of what I’ll call the ‘cat scare’, I.E. a jump scare which turns out to be something completely benign, such as a cat. Sadly, ‘A Quiet Place’ falls firmly into these two categories.
I suppose it makes an amount of sense. Jump scares are always signposted by long periods of silence followed by a big ‘boo’. Well, since this film is nothing but silence, it would seem obvious to use jumps. It is a shame because the same principle could be used to build tension and use the sense of fear that comes with that without having to be cheap about it.
The script is terrible. The movie plays in the way that most bad horror movies play, the plot relies entirely on people making stupid decisions. Without spoiling anything, the opening of the film starts 80-something days after the monsters have basically destroyed the world. In the opening, a kid starts playing with an incredibly noisy toy, thereby attracting the monsters. How in 80-something days did this kid not get the idea NOT to make noise?
At one point that father of the family takes his son to a nearby water source to collect fish. While there, he tells his son that they can make noise there because a nearby waterfall will drown them out. My question, why don’t they just move there? Live a more comfortable life there instead of being quiet forever. They also have a speaker system around their little compound. Firstly, this doesn’t make sense, if you’re trying to be quiet why the hell would you have this installed. Secondly, why not just play a loud sound plaything through them constantly? That would drown anything else out and keep them safe from the monsters.
Alright, spoilers ahead. Skip this paragraph if you plan on watching the film at any point. A pretty major driving point of the plot is the fact that the mother is pregnant. Well, at about the halfway point, her water breaks. Now, I’m no expert on childbirth, but I do know that the average delivery time for someone who’s previously delivered is about 8-hours. Some people have claimed to have delivered in 10-minutes, albeit without much evidence to back it up. The mother in this movie can join the ranks. No more than 10-minutes after her water breaks, we have a beautiful baby boy. A baby boy, I should point out, that only seems to cry and make noise when the script needs it to.
The film isn’t a complete write-off. The use of sign language was handled very well. The fact that one of the characters, and actors as it happens, is deaf gives a plausible explanation as to why this family would know how to sign, and all the actors make it look incredibly natural.
Overall: Not nearly as smart as the hype would have you believe. The script isn’t intelligent, or even all that original. Oh, and the CGI was terrible. However, at a brisk 90-minutes, the film is just about watchable, but not something I think I’ll ever feel the need to watch again.
Recommended, but just barely. That is unless you’re able to secure a copy of ‘Tremors’, in which case… just watch ‘Tremors’.